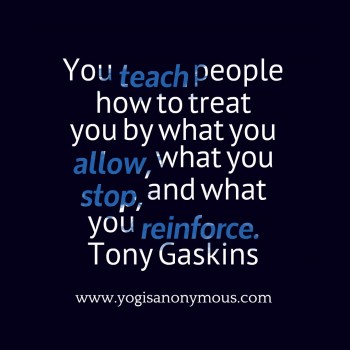 You can’t control what other people will do or say, but you can choose the way you’ll respond. This comes up in so many areas. Maybe you have a family member who has a history of being verbally and emotionally abusive, and now you’ve gotten to the point where you simply don’t want to subject yourself to that treatment any longer. Lots of things can get us to that place; we’re always evolving. Maybe you’ve reached a point in your healing process where you’re ready to set boundaries. Maybe you have children now, and you’re able to speak up on their behalf, even though you’ve never been able to stand up for yourself. Whatever it is, you won’t change the offending party, but you can definitely change the way you interact with him or her.

Speaking calmly but with confidence about your experience is a gift you give yourself, and everyone in your life. Being able to say, “When you do this, it makes me feel X, and X is not okay for me anymore. So from now on, when I come to town for a visit, I’ll stay at a hotel. We’ll see how things go. If you’re unable to not do or say X, then at least I can remove myself from the situation.” You’re taking responsibility for your feelings. You’re not blaming them or making them wrong, you’re just stating how things are for you, and how you’ll be honoring what’s true for you. If the other party tells you not to come if that’s how it’s going to be, so be it. You aren’t here to be a punching bag for anyone. If the requirement is for you to subject yourself to behavior or comments that are hurtful, that’s too great a cost. If a person can’t be kind and loving, if that’s too much to ask, they don’t belong in your life. If you want them in your life anyway, then you have to set boundaries that work for you, and if even those can’t be respected, then you’re left with no choice but to walk away.

When we start to make changes in the way we relate to the people around us, you can bet there’s going to be push-back. This is especially true if we’re shifting a role we’ve always played. I used to be a lot less assertive. Sometimes people would say hurtful or inappropriate things to me, and I’d collapse in on myself and internalize the experience. I’d have the feeling of being punched in the stomach, way down where it really hurts, but no words would come out of my mouth. When that started shifting for me, I was met with resistance and threats and rage. How dare I stand up for myself? But that’s your job, that’s your work. You carve out a place for yourself and a way of being that brings you peace and joy, and you don’t sacrifice that for anyone. Most people come around. They might scream and yell and wave their arms, but eventually, most people will quiet down and shift the way they deal with you. So you’re not changing them or teaching them or making them wrong, you’re just requiring a certain level of respect and consideration. You’re changing the rules of engagement.

This is an essential component of healing. You have to be able to act on your own behalf. You have to value your own tender heart, and your peace of mind, and your ability to look at yourself in the mirror at the end of the day when you’re brushing your teeth. When we allow ourselves to be mistreated, we also betray ourselves, and it’s hard to face that. If you grew up feeling powerless, it’s likely that you regress to that stance when you feel confronted, and when you start trying to assert yourself, it will probably come out with more force than you intend and that’s okay. You can tell the people in your life that you’re trying to change some profound things about the way you’re moving through the world, because the way you’ve been doing it so far is not working for you. You can explain that you’re working on standing up for yourself, and speaking up when things don’t feel good or right, but that this is a new experience, and you’re still birthing into this new way of being, and it isn’t all going to be pretty. Maybe they’ll take that in, and maybe they won’t. You’re not responsible for managing anyone else’s reactions or path, you’re just responsible for your own clear communication. Practice with people you trust. Like anything else, the more you do it, the easier it gets.

Moving through life allowing yourself to be disrespected is not going to work; it’s too much to bear. If you need support with this, reach out. I do coaching sessions, but I can also recommend wonderful therapists. Hitting a bag or taking a kick-boxing class might not be a bad idea, either.

Sending you love and wishing you strength and peace,

7 thoughts on “What You Allow”