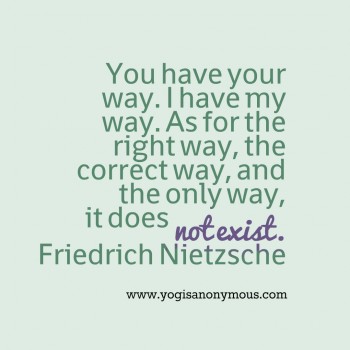 Sometimes it’s easier to be forgiving with other people than it is with ourselves. This has a lot to do with your personality, and your history with making mistakes. If, for example, you were badly punished when you made mistakes growing up, whether they were big or small, you might have a lot of fear around screwing up. If you felt that love and affection and approval were withdrawn when you blew it, the stakes become even higher. If that resonates with you, you might also find that you’re invested in being “right”, because if you aren’t right, you’re wrong, and if you’re wrong, you’ve made a mistake and there will be painful consequences. Fear usually drives the need to be right, and people who suffer from “Needing to Be Right Disease” often have a very hard time saying, “I’m sorry.” Which is, of course, the antidote.

If you’re dealing with someone who has to win every argument, or can’t ever say they’re sorry or see their part in a misunderstanding, you might be dealing with narcissistic pride, but you might also be dealing with fear. If this is someone you love, or someone you’re still getting to know, it might be worth your time to investigate the source of their need. Obviously, no one is always right, and most of the time, if there’s a miscommunication, it’s a two-party deal. Not always, so don’t freak on me, here. Sometimes you’re dealing with personality disorders and it doesn’t matter what you do or say; logic has no bearing, but I’m not talking about that. I’m talking about people who are normally kind and considerate, thoughtful and reasonable, until they feel they might have screwed up. Then this other entity comes out, this person who digs his heels in, or who can’t hear you because she’s raising her voice, or storming out the door. Clearly, that’s not a sustainable way to communicate, or try to work out problems. I’m just offering a possible explanation. Sometimes if we can understand that underneath anger and defensiveness, what we’re really dealing with is fear and pain, it inspires us to be kind, compassionate, and patient.

You will never get through to someone if they’re in the middle of a fight or flight reaction. That isn’t the time to offer your insights about what might be driving their need to be right. In fact, if you bring it up then, good luck to you! But if you care enough to understand, when things are calm and your friend is not feeling threatened or attacked or backed into a corner, you might ask how it was handled when they made mistakes as a kid. What did discipline look like in their house? How were they punished, and over what? This is the kind of conversation that might bring you a lot closer to someone you love, and it also might enable you to help them grow, to create a safe space to make mistakes, and to show them that you aren’t going to run out the door, or stop loving them, or “make them pay.”

People who fear being wrong berate themselves more than you ever could when they blow it, they obsess over it. And let me be clear, it’s not always the way someone was raised. Sometimes a person is a perfectionist. Maybe they had a parent who was very hard on her or himself, and they ingrained that behavior, so anything less than perfection is intolerable. Type A personalities suffer from this. Anyway, I know a lot about beating the crap out of yourself when you blow it, because I did that for years and years. I often say that after twenty or so years of yoga, pretty much six days a week, I am a mostly recovered Type A personality. 93% recovered on a good day, but it’s a hard way to live, if you’re expecting to never make a mistake, because obviously, you will, and probably you will a lot. It’s kind of an intrinsic part of being human. So if you feel disappointed in yourself, or disgusted with yourself, or like you want to jump out of your own intolerable skin, life is going to be pretty rough. You can lose days, weeks, months, even, over mistakes you’ve made. You can keep “boiling yourself”, traveling into the past, replaying what you’ve done, rewriting the scene so you don’t blow it, and lose all kinds of precious time you could have been enjoying the present.

Learning to expect that you’ll make mistakes is essential, and learning to own your mistakes and be accountable for your actions and choices is also imperative if you want to have healthy, lasting relationships of any kind in your life. Saying, “I’m so sorry”, and meaning it, is so freeing. It frees you, and usually, it’s all the other person needs or wants to hear. We all just long to be seen and understood by the people we love. We want to be known. It’s not about winning or being right. It’s about being seen and cherished and safe. Give yourself the gift of an inner voice that roots you on, don’t keep living with one that tears you down. There’s no need for that. A loud inner critic is a roommate who needs an eviction notice. That’s a voice that needs to be starved so you can have some peace. For me, I did most of that work on my yoga mat. If that shaming, critical voice spoke up, I didn’t give it any credence. I came back to my breath, reminded myself to be kind, and got back to the business of healing. It’s not a magic bullet, but I don’t know of anything that is when it comes to healing. Forgive yourself. Be reasonable with yourself. Let the love in.

Sending you some right now,